What Are The Top Programming Languages

Home Features What Are The Top Programming Languages
NextPrevious

What Are The Top Programming Languages

It’s all about Big Data.

So what are the top programming languages of 2015 (so far)? Well, it completely depends on the platform. But what we do know is: big data is dominant.

Below is their top 10, in accordance with their members, but it’s likely to be pretty spot on for the developing community as a whole. The right hand column indicates the 2014 ranking for reference. 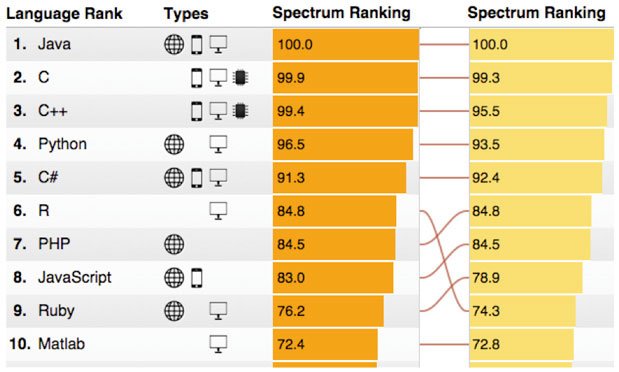 As visible, the top five have remained undisturbed since last year. While the order is also the same between Java, C, C++, Python and C#, C is rapidly approaching Java’s coveted top spot, followed closely by C++.

While a few languages have dropped off the list due to a lack of significant data this year, seven new ones have appeared. These include Apple’s new language, Swift, which has gained plenty of attention since its conception just 14 months ago. Another new entry is that of Nvidia, a graphics chip company, who created Cuda for general computer usage to complement the specialised graphics processors that they manufacture.

Not content with the broad categorisation of these rankings? If you wanted to assign your own weightings within your particular field, head to their full interactive results page here.

For example, to the right is the ranking of the top 10 languages for mobile development in terms of their employability, and what skills companies want from their IT professionals.

The Top 10 Mobile Languages For Employers

The Top 10 Mobile Languages For Employers 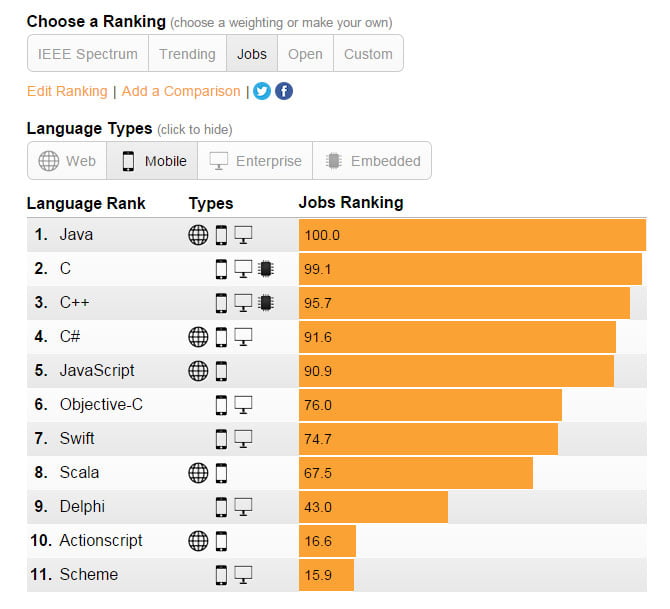